The exotic and beautiful vistas of Kauai have attracted numerous film producers over the years.

In 1958 South Pacific put Kauai in the spot light. Lumaha'i Beach was pictured on posters and postcards with Mitzi Gaynor "washing that man right out of her hair".

In 1961 Blue Hawaii, with Elvis as a tour guide, Coco Palms was highlighted.

John Wayne and Lee Marvin were filmed at Hanamaulu Beach Park in the 1963 hit Donovan's Reef.

In 1981 Raider's of the Lost Arc was shot in part on the Huleia River.

In 1993 Hurricane Iniki interrupted filming of Jurassic Park, but that didn't deter them from returning for the sequels. Mahaulepu is where the small dinosaurs were seen in the Lost World of Jurassic Park.

In 1995 Dustin Hoffman starred in Outbreak and got to destroy an African village on the Wailua River.

Harrison Ford returned to Kauai again in 1998 for the filming of Six Days and Seven Nights, about a crash on a deserted island. 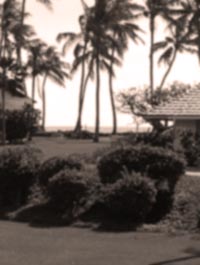 © 1998-2020 KiahunaCondos.com - Celebrating our 20th year on the internet - Web Design by Website Sedona